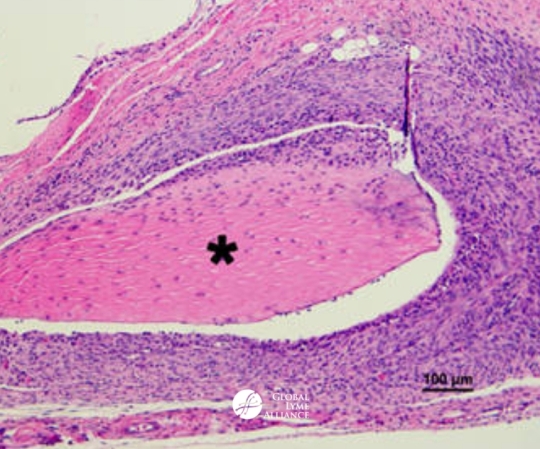 Lyme disease patients, infected via tick bite with the bacterial spirochete B. burgdorferi, are routinely treated with two to four weeks of Doxycycline, Amoxicillin, or Cefuroxime, which is curative in many cases if treated at the onset of the infection. However, research shows that despite treatment, up to 20% of patients continue to suffer lingering symptoms of fatigue, pain, or joint and muscle aches, and neurocognitive manifestations that last 6 months or more.  This clinically-defined condition is known as post-treatment Lyme disease syndrome (PTLDS).  A long-standing mystery is whether development of PTLDS reflects

Zhang and colleagues published several influential papers over the past five years revealing a potential answer to this mystery. His lab showed that in vitro stationary phase (non-growing) cultures of B. burgdorferi contain different morphological variants. These bacterial variants include planktonic (free-swimming) spirochetal forms, round body forms, and aggregated microcolony (biofilm-like) forms, which have varying levels of persistence (e.g., the capacity to tolerate antibiotic exposure) in comparison to the log phase culture, which mainly consists of rapidly growing spirochetal forms with no or few persisters. B. burgdorferi develops into these morphological variants under stress conditions but their relevance to severe and persistent Lyme disease was unclear until the publication of this new study.

Zhang et al. report that biofilm-like microcolony (MC) and planktonic (free-swimming spirochete and round body; SP) variants found in stationary phase cultures were not only more tolerant of exposure to antibiotics but also caused more severe arthritis in mice than the log phase spirochetes (LOG). Importantly, the authors show that the murine infection caused by LOG could be eradicated by Ceftriaxone (CefT) whereas the persistent infection established with MC could not be eradicated by Doxycycline (Doxy), CefT, or Vancomycin (Van), or Doxy+CefT or Van+CefT, but could only be eradicated by the persister drug combination Daptomycin (Dapto)+Doxy+CefT.

This GLA-funded work establishes for the first time that:

Varying levels of persistence and the severity of disease pathology caused by infection with B. burgdorferi is linked to different morphological forms of the spirochete.

The following facts highlight the importance of this novel discovery. The number of patients developing PTLDS, or chronic Lyme, which is less clinically well-defined, is on the rise; a trend that is consistent with the rise in annual incidence of Lyme disease, which is ~427,000 cases. The absence of a full understanding of the cause(s) of PTLDS hampers efforts to effectively treat patients suffering with this syndrome. The authors demonstrated that the degree of persistence or persistent infection varied with different inoculae, where biofilm-like microcolony inoculae produced a more severe and persistent disease that could not be eradicated by the current Lyme antibiotics or even some two-drug combinations but could be eradicated by the persister drug combination Dapto+Doxy+CefT. In contrast, the disease induced by the log phase spirochetal forms is more readily eradicated by CefT. That the inclusion of persister drug Dapto, in combination with Doxy and CefT, is critical for eradicating the persistent infection established by persister inoculae validates the relevance of Dr. Zhang’s GLA-funded efforts to screen for drugs or drug combinations against stationary phase bacteria enriched in persisters in vitro, which were published by Feng et al. in 2014 and 2015 (see influential papers here).

Finally, the reported findings may not only provide a new understanding of PTLDS and perhaps chronic Lyme disease, but also will inform and accelerate development and testing of novel persister drug combination regimens that can more effectively cure persistent Lyme disease in the future. GLA’s goal in the near future will be to support human clinical trials to evaluate if the persister drug combination could more effectively treat or cure patients with PTLDS/chronic Lyme disease.

As GLA’s Chief Scientific Officer, Dr. Sellati leads GLA’s research initiatives to accelerate the development of more effective methods of diagnosis and treatment of Lyme and other tick-borne diseasesmorphological variantshttps://www.dovepress.com/evaluation-of-in-vitro-antibiotic-susceptibility-of-different-morpholo-peer-reviewed-article-IDR  Metronidazole led to reduction of spirochetal structures by ~90% and round body forms by ~80%. Tigecycline and tinidazole treatment reduced both spirochetal and round body forms by ~80%–90%.
In terms of qualitative effects, only tinidazole reduced viable organisms by ~90%. Following treatment with the other antibiotics, viable organisms were detected in 70%–85% of the biofilm-like colonie

Unfortunately, they use the falsely skewed 10-20% percentages regarding the PTLDS group when microbiologist Holly Ahern argues convincingly that when ALL subgroups are added, it’s more like 60% that develop chronic/persistent symptoms:  https://madisonarealymesupportgroup.com/2019/02/25/medical-stalemate-what-causes-continuing-symptoms-after-lyme-treatment/  This is quite important and reveals the true state of affairs.

When I heard Dr. Zhang a few years back, he was working on this very concept, and please know the mycobacterium drugs have many side-effects that require close monitoring:  https://madisonarealymesupportgroup.com/2016/10/09/mycobacterium-drugs-for-ld/

The drug we used effectively throughout our treatment was Tinidazole which we pulsed throughout the entire time with 2-3 other antibiotics focusing on Bb’s different morphological variants as well as the various coinfections we had:  https://madisonarealymesupportgroup.com/2016/02/13/lyme-disease-treatment/  Dr. Eva Sapi found:

https://www.dovepress.com/evaluation-of-in-vitro-antibiotic-susceptibility-of-different-morpholo-peer-reviewed-article-IDR  Metronidazole led to reduction of spirochetal structures by ~90% and round body forms by ~80%. Tigecycline and tinidazole treatment reduced both spirochetal and round body forms by ~80%–90%.  In terms of qualitative effects, only tinidazole reduced viable organisms by ~90%. Following treatment with the other antibiotics, viable organisms were detected in 70%–85% of the biofilm-like colonies.