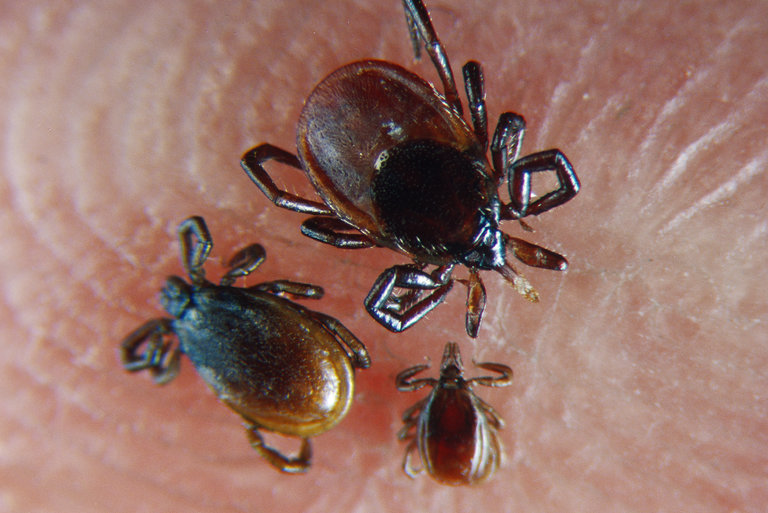 The number of people who get diseases transmitted by mosquito, tick and flea bites has more than tripled in the United States in recent years, federal health officials reported on Tuesday. Since 2004, at least nine such diseases have been newly discovered or introduced into the United States.

Warmer weather is an important cause of the surge in cases reported to the Centers for Disease Control and Prevention, according to the lead author of a study in the agency’s Morbidity and Mortality Weekly Report.

But the author, Dr. Lyle R. Petersen, the agency’s director of vector-borne diseases, repeatedly declined to connect the increase to the politically fraught issue of climate change, and the report does not mention either climate change or global warming.

Many other factors are at work, he emphasized, while noting that “the numbers on some of these diseases have gone to astronomical levels.”

C.D.C. officials called for more support for state and local health departments. Local agencies “are our first line of defense,” said Dr. Robert Redfield, the C.D.C.’s new director. “We must enhance our investment in their ability to fight these diseases.”

Although state and local health departments get brief infusions of cash during scares like the 2016 Zika epidemic, they are chronically underfunded. A recent survey of mosquito control agencies found that 84 percent needed help with basics like surveillance and pesticide-resistance testing, Dr. Petersen said.

While the C.D.C. did not suggest that Americans drop plans for playing outdoors or lying in hammocks this summer, Dr. Redfield emphasized that everyone — especially children — needed to protect themselves against tick and mosquito bites.

The real case numbers were undoubtedly far larger, Dr. Petersen said. For example, the C.D.C. estimates that about 300,000 Americans get Lyme disease each year, but only about 35,000 diagnoses are reported.

The study did not delve into the reasons for the increase, but Dr. Petersen said it was probably caused by many factors, including two related to weather: Ticks thriving in regions previously too cold for them, and hot spells triggering outbreaks of mosquito-borne diseases.

Other factors, he said, include expanded human travel, suburban reforestation and a dearth of new vaccines to stop outbreaks.

In an interview, Dr. Petersen said he was “not under any pressure to say anything or not say anything” about climate change and that he had not been asked to keep mentions of it out of the study.

More jet travel from the tropics means that previously obscure viruses like dengue and Zika are moving long distances rapidly in human blood. (By contrast, malaria and yellow fever are thought to have reached the Americas on slave ships three centuries ago.)

A good example, Dr. Petersen said, was chikungunya, which causes joint pain so severe that it is called “bending-up disease.”

In late 2013, a Southeast Asian strain arrived on the Dutch Caribbean island of St. Maarten, its first appearance in this hemisphere. Within one year, local transmission had occurred everywhere in the Americasexcept Canada, Chile, Peru and Bolivia.

Tickborne diseases, the report found, are rising steadily in the Northeast, the Upper Midwest and California. Ticks spread Lyme disease, anaplasmosis, babesiosis, Rocky Mountain spotted fever, rabbit fever, Powassan virus and other ills, some of them only recently discovered.

Ticks need deer or rodents as their main blood hosts, and those have increased as forests in suburbs have gotten thicker, deer hunting has waned, and rodent predators like foxes have disappeared.

(A century ago, the Northeast had fewer trees than it now does; forests made a comeback as farming shifted west and firewood for heating was replaced by coal, oil and gas.)

Most disease outbreaks related to mosquitoes since 2004 have been in Puerto Rico, the Virgin Islands and American Samoa. But West Nile virus, which arrived in 1999, now appears unpredictably across the country; Dallas, for example, saw a big outbreak in 2012.

For most of these diseases, there are no vaccines and no treatment, so the only way to stop outbreaks is through mosquito control, which is expensive and rarely stops outbreaks. Miami, for instance, was the only city in the Western Hemisphere to halt a Zika outbreak with pesticides.

The only flea-borne disease in the report is plague, the bacterium responsible for the medieval Black Death. It remains rare but persistent: Between two and 17 cases were reported from 2004 to 2016, mostly in the Southwest. The infection can be cured with antibiotics.

Dr. Nicholas Watts, a global health specialist at University College London and co-author of a major 2017 report on climate change and health, said warmer weather is spreading disease in many wealthy countries, not just the United States.

In Britain, he said, tick diseases are expanding as summers lengthen, and malaria is becoming more common in the northern reaches of Australia.

But Paul Reiter, a medical entomologist at the Pasteur Institute, has argued that some environmentalists exaggerate the disease threats posed by climate change.

The 2003-2014 period fell during what he described as “a pause” in global warming, although the notion of a long trend having pauses is disputed.

Also, disease-transmission dynamics are complicated, and driven by more than temperature. For example, transmission of West Nile virus requires that certain birds be present, too.

In the Dust Bowl years of the 1930s, St. Louis encephalitis, a related virus, surged, “and it looked like climate issues were involved,” Dr. Reiter said. But the surge turned out to depend more on varying hot-cold and wet-dry spells and the interplay of two different mosquito species. St. Louis encephalitis virtually disappeared, weather notwithstanding.

A. Marm Kilpatrick, a disease ecologist at the University of California, Santa Cruz, said many factors beside hot weather were at work, including “a hump-shaped relationship between temperature and transmission potential.”

Warm weather helps mosquitoes and ticks breed and transmit disease faster, he explained. But after a certain point, the hotter and drier it gets, the more quickly the pests die. So disease transmission to humans peaks somewhere between mildly warm and hellishly hot weather.

Experts also pointed out that the increase in reports of spreading disease may have resulted partially from more testing.

Lyme disease made family doctors begin to suspect tick bites in patients with fevers. Laboratories began looking for different pathogens, especially in patients who did not have Lyme. That led to the discovery of previously unknown diseases.

**Comment**
I for one appreciate Peterson’s refusal to push the climate change model.  Finally, someone who refuses to fall for the bait.
While mosquitos are more dependent upon weather for survival, ticks are appearing nearly indestructible, but fire does kill them:  https://madisonarealymesupportgroup.com/2018/04/03/fire-good-news-for-tick-reduction/
For more on why climate change does not affect Lyme Disease one iota:  https://madisonarealymesupportgroup.com/2017/08/14/canadian-tick-expert-climate-change-is-not-behind-lyme-disease/
https://madisonarealymesupportgroup.com/2017/07/08/global-warming-numbers-fudged/
Excerpt:
Ottmar Edenhofer, lead author of the IPCC’s fourth summary report released in 2007 candidly expressed the priority. Speaking in 2010, he advised, “One has to free oneself from the illusion that international climate policy is environmental policy. Instead, climate change policy is about how we redistribute de facto the world’s wealth.”

“Under Our Skin” May is Lyme Awareness Month