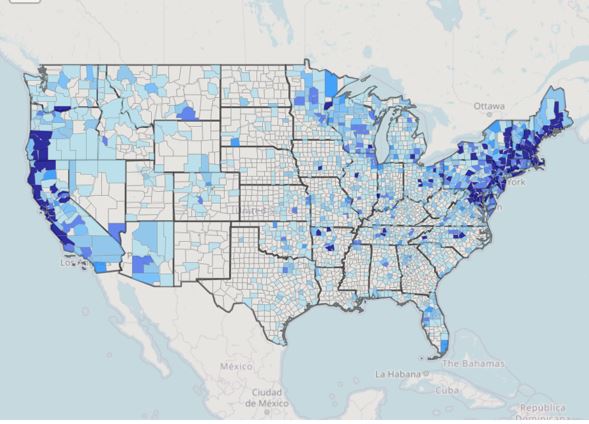 Want an easy way to see where disease-carrying ticks have been found throughout the United States?

The maps are based on data published in mSphere, a multidisciplinary open-access journal of the American Society for Microbiology.

The information came from ticks submitted by citizen scientists as part of BALF’s Free Tick Testing Program, which ran from 2016 to 2019.

The study found infected Ixodes ticks in 116 counties which were not previously identified by the Centers for Disease Control as having them.

The testing program collected more than 20,400 ticks. 8,954 were Ixodes ticks, capable of carrying the most common tick-borne pathogens.

The study evaluated the distribution and prevalence of the four most common tick–borne pathogens:

The interactive maps only represent data from this citizen science study. They do not represent the total risk of tick-borne infections in the US.

“These maps will be eye-opening for many Americans as it makes it easy to see that ticks carrying disease-causing bacteria can be commonly found across the US,” stated Tanner Porter, MS, a research associate at TGen and the lead author on the study.

“If you aren’t aware of the possibility of ticks, either in your backyard or whilst traveling, you are unlikely to look for them – but an unseen tick can still transmit a pathogen and cause disease. It is important for everyone to know to look for ticks, be aware of the pathogens that they carry, and takes steps to mitigate their risk.”

The study builds on recently released CDC data that added 100 counties to the list of those with disease-carrying ticks.

The Promise of a Targeted Drug For Lyme Disease