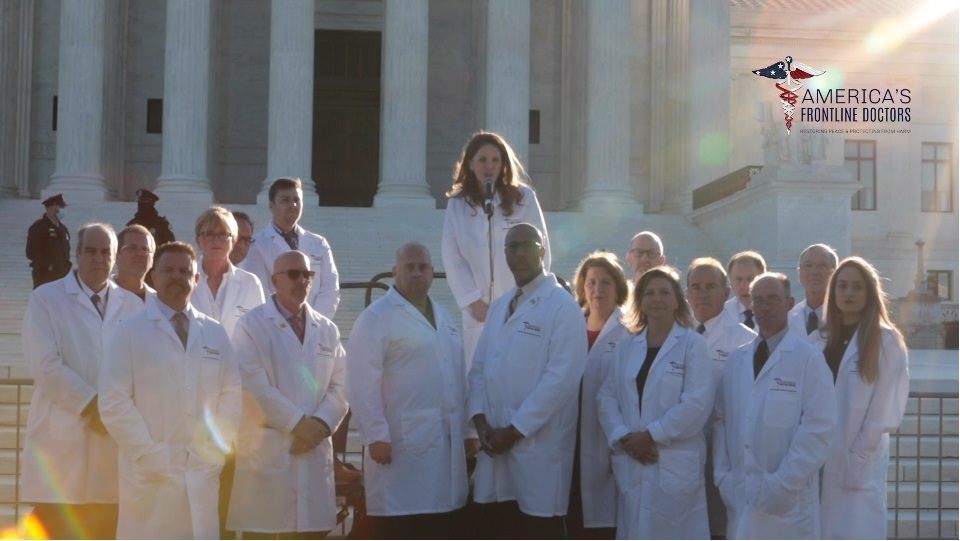 You can read about their first visit to D.C. last July, where they exposed the hydroxychloroquine (HCQ) scandal, here:

Their Press Conference on the steps of the Supreme Court back in July quickly went viral, and was promptly deleted and censored by Big Tech platforms such as Facebook and Google’s Youtube.

Health Impact News grabbed a copy before they were deleted, and published it on our Bitchute channel, where it currently has over 190,000 views.

They were back in even greater numbers this week, again giving an initial Press Conference in front of the Supreme Court.

Hello everybody. I am Dr. Simone Gold. I’m a board certified emergency physician and the founder of America’s Frontline Doctors.

And we’ve come back with some of my group for the second White Coat Summit.

We’re here to speak to America just like we did on July 27th.

At that time we brought the American people truth and hope and optimism.

And we’re here to give you more truth and more reasons to be optimistic and to not live in fear.

There continues to be a great deal of disinformation and outright censorship.

Since our Summit, the censorship unfortunately has gotten worse.

Because of that, we’ve established a website: America’s Frontline Doctors, where you can find the truth, where the truth is not censored.

Today, we’re going to bring you information about masks, about lockdowns, about most importantly, early treatment.

Reasons to be optimistic. We’re going to dispel the myths.

I want to start with masks. And I start with this because there is a legal crisis, a Constitutional crisis, that we’re not recognizing. And it is, to some extent, personified by the forced, mandated wearing of masks.

Let’s not tip toe around the great big elephant in the room. The facts are actually not in dispute.

Masks are completely irrelevant in blocking the SARS-COV2 virus.

Prior to March 2020 there were no scientific journals that asserted that masks could keep out a virus.

Consider what our Emperor Fauci said when asked if he’s sure that masks work.

Now remember, he is not new to the game. This has been his life’s work for decades.

Dr. Fauci said, “When you’re in the middle of an outbreak, wearing a mask might make people feel better. And it might even block a droplet.

But it isn’t providing the perfect protection that people think it is, and often there are unintended consequences.”

What the New England Journal of Medicine, a premier medical journal, had to say about masks. The following:

“It is clear that masks serve symbolic roles. Masks are lucky charms that may help increase health care worker’s perceived sense of safety and well-being.  Although such reactions may not be strictly logical, we’re all subject to fear and anxiety, especially during times of crisis.  Expanded masking protocols greatest contribution may be to reduce the transmission of anxiety.”

That is per the New England Journal of Medicine.

I will put it plainly to you, my fellow Americans, you have been lied to by the media.

And John F. Kennedy pointed out, “It does not matter if the propaganda had a sinister purpose. The great enemy of the truth is very often not the lie, but the myth persistent, persuasive, and unrealistic.”

Go to top link to see the Press Conference

I’m telling you – these doctors deserve awards.  In a time of unprecedented censorship, bullying, and conflicts of interest, these folks stand up and state the truth.  They’ve already been mercilessly attacked:

But Lyme/MSIDS patients are used to this sort of bullying and censorship. It’s been going on since the organism was identified and continues to this day.  Our doctors have also been mercilessly and unfairly attacked:  https://madisonarealymesupportgroup.com/2020/04/26/cdc-playbook-learning-from-lyme/

It’s beyond time for a CDC/NIAD/FDA/HHS walk away movement:   https://madisonarealymesupportgroup.com/2020/09/01/it-is-time-to-reboot-public-health-time-for-a-cdc-niaid-fda-walk-away-movement/

Comments Off on Frontline Doctors Return to Washington D.C. to Dispel COVID Myths and to Offer Truth and Hope