‘I Never Had a Single Unvaccinated Patient with Autism’ — Dr. Ben Tapper

(Natural News) When it comes to the Religion of Vaccination, there’s one area of research that’s completely off-limits, and it encompasses looking into vaccine safety and effectiveness independently, and with an open mind. The reason for this, of course, is that every time a scientist dares to do this, he or she typically discovers that vaccines aren’t nearly as safe or effective as the medical police state claims – which instantly makes said scientist a target of the medical establishment, which has no qualms about doing almost anything in order to silence the truth.

One recent and prominent example of this type of medical tyranny involves Professor Chris Exley of Keele University in the United Kingdom, whose focused research into aluminum toxicity led him to conclude that childhood vaccines, many of which contain neurotoxic aluminum, can, in fact, cause autism – a discovery that, if you’ve been following independent vaccine science for any considerable period of time, is inherently “controversial” and a recipe for trouble.

Like Dr. Andrew Wakefield before him, Prof. Exley merely reported his findings in the interest of public health, as any good scientist would do. And in the process, he’s made himself enemy number one of the Vaccine Mafia, which is now trying to destroy his career and life by barring him from raising any further funding for his research endeavors.

In essence, Prof. Exley has officially blown the lid off the highly-destructive nature of aluminum in vaccines, indicating that this common chemical adjuvant has the potential to cause “severe and disabling” autism in children who are injected with it. And for violating the medical establishment’s never-to-be-challenged doctrine of “all vaccines are safe and effective,” Prof. Exley is now having to endure the ire of the priests and priestesses of the Cult of Vaccination, which are now out for blood.

Support Prof. Exley’s GoFundMe to help bring the truth about vaccines and autism to as many people as possible

Prof. Exley was one of the underwriters for an eye-opening 2017 study published in EBioMedicine, a journal associated with The Lancet, which found that underarm cosmetic products – mainly antiperspirant deodorants that contain aluminum – increase users’ risk of developing breast cancer.

He’s also studied other areas of aluminum toxicity similarly unrelated to vaccines – though vaccines eventually became a natural next-step for his particular area of focus. And rather than censor the progressive course of his research endeavors, Prof. Exley stuck true to science – and for doing this, he’s now paying a big price.

The good news, though, is that many people are on Prof. Exley’s side, and are working hard to get him funding from other sources. Some of his most ardently faithful followers have actually set up a GoFundMe page to help raise financial support for his continued research endeavors.

In light of the medical establishment’s continued betrayal of not only his work but also science at large, it’s up to everyday folks who care about truth to step up to the plate to make sure that parents know the truth – and more importantly, to ensure that as many children as possible are protected against toxic injections that could cause them lifelong harm.

“We’ve seen this drama unfold many times,” comments Age of Autism about this latest saga.

“A well respected doctor or researcher begins to ask questions about vaccine safety as a result of the science he or she conducts, and his career is adversely affected … [Prof. Exley’s] funding is dwindling and he needs our help.”

Also, be sure to check out the book How to End the Autism Epidemic by J.B. Handley.

Sources for this article include:

The following graph pretty much says it all: 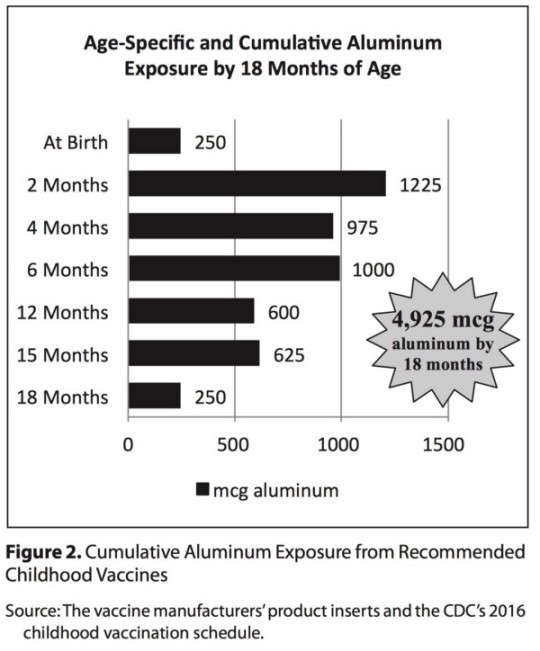 The following information taken from the Organic Lifestyle magazine shows the censorship happening on anyone who departs from the accepted narrative that touts vaccines are safe:  https://www.organiclifestylemagazine.com/doctor-asks-fda-to-reconsider-safe-levels-of-aluminum-gets-censored-and-suspended-on-medium

Dr. James Lyons-Weiler’s published a study, Reconsideration of the immunotherapeutic pediatric safe dose levels of aluminum, that says the recognized safe aluminum levels in vaccines are based on immune efficacy and ignore body weight. James says that several critical mistakes have been made in the consideration of pediatric dosing of aluminum and that safety inferences of vaccine doses of aluminum have relied solely on dietary (ingested, not injected) exposure studies of adult mice and rats.

On Day 1 of life, infants receive 17 times more aluminum than would be allowed if doses were adjusted per body weight.

The first serious problem (Problem #1) is that a provisionally tolerable weekly limit assumed to be safe was, by a series of errors and bad assumptions, transformed into a daily limit that appeared to be backed by studies. The studies used were not up to date, and the FDA’s determination used spurious estimates to transform safety information from dietary studies of adult mice into injected safe limits in human infants. These errors were made, in part, in the pediatric limit consideration by the FDA, who used outdated information not consistent with other organizations like World Health Organization.

To add to the confusion, the 1 mg/kg/week was also then changed to 2 mg/kg/week. The ATDSR used information from one study, assumed 1 mg/kg/week, adjusted using arbitrary functions that are without a doubt as good as a bad guess.

The provenance of these errors is reviewed further below, and in our newly published study.”

We came across this study last week on Medium. It has since been deleted, along with Jame’s account. We checked on web.archive.org to see if the page had been preserved; it had not. We searched Google, but it’s gone from search results, but we did find the article republished by James on LinkedIn.

This Open Letter originally appeared on Medium.com. Due to their censorship, it is ported here.= JLW. It is based on peer-reviewed studies.” – Dear FDA: Please Reconsider “Safe” Levels of Aluminum…

We also noticed that Jame’s Medium account has been suspended. And Bing is a little slower to eliminate the search results. If you want, click here to see their Cached version while it’s still available, but you can also read the full article republished on LinkedIn.

Related: Doctors Against Vaccines – Hear From Those Who Have Done the Research

Articles on aluminum in vaccines:  https://vactruth.com/?s=safe+levels+of+aluminum

For a great site on all things vaccine related.  There is a list of scientific articles: https://vaccinepapers.org