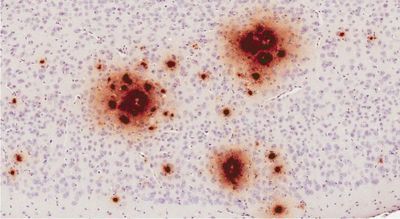 The brains of Alzheimer’s disease patients have an abnormal build up of amyloid-β proteins and tau tangles, which, according to many researchers, drives the ultimately fatal cognitive disease. This theory is being challenged by a newer one, which posits that microbes may trigger Alzheimer’s pathology.

Two new studies, using different approaches, further bolster this pathogen theory. Analyzing the transcriptomes of post-mortem brain samples from patients with Alzheimer’s disease, one group of researchers finds that two strains of human herpesvirus are significantly more abundant than in the brains of people of the same age without Alzheimer’s disease. Gene networks in the brains of Alzheimer’s patients with these strains are also rewired such that disease-related genes are differentially expressed compared to controls.

In the other study, another team of investigators observed in mouse models and in a three-dimensional human neuronal cell culture that a Herpseviridae infection could seed amyloid-β plaques.

“These two papers add to a weight of evidence that viruses—and pathogens in general—must now be seriously considered as causal agents in Alzheimer’s disease,” Chris Carter, who studies the genetics and epidemiology of Alzheimer’s and other neurological disorders at Polygenic Pathways in the U.K., tells The Scientist.

Over three decades, there have been accumulating data from human studies suggesting that certain microbes, namely, viruses bacteria and fungi, may trigger or promote Alzheimer’s pathology in the aging brain.

The Mount Sinai group initially set out to mine their RNA and DNA sequencing data from Alzheimer’s brain samples for drug targets. Then they found these viral sequences that were difficult to ignore. “I recently gave a talk that I titled, ‘I went looking for drugs but all I found was these viruses,’” study coauthor Joel Dudley, a genomics researcher at the Icahn School of Medicine at Mount Sinai, tells The Scientist.

In their study of elderly human brains, Dudley and the team from Mount Sinai sequenced more than 1,400 post-mortem brain samples, finding the first evidence that human herpesviruses 6A (HHV-6A) and 7 (HHV-7) are in greater abundance in regions of the brain including the superior temporal gyrus, anterior prefrontal cortex, and dorsolateral prefrontal cortex.

These data suggest that multiple pathogens, and not just these viruses, likely contribute to Alzheimer’s disease.

Using RNA and DNA sequencing data, the team computationally generated regulatory network models that implicated the presence these viruses in altering the activity of genes linked to Alzheimer’s risk.

The researchers turned to one of the microRNAs, miR-155, found in their analysis to be suppressed by HHV-6A in the human samples, to see what the functional consequence is of this interaction. They homed in on miR-155 because it was a novel microRNA and because it had been previously linked to herpes viruses. When they knocked out the gene for miR-155 in a mouse model of Alzheimer’s disease, the animals’ brains had larger amyloid plaques and higher levels of amyloid-β compared to the mouse model with a wildtype MIR155 gene.

“Conceivably, the viral proteins are acting as transcription factors that control expression of Alzheimer’s risk genes,” coauthor Sam Gandy, a professor of neurology who specializes in Alzheimer’s disease at Mount Sinai, writes in an email to The Scientist. “Perhaps this viral dysregulation of Alzheimer’s genes that we see promotes the Alzheimer’s pathology of amyloid beta aggregation, inflammation and tau tangles,” he says.

The results, published today (June 21) in Neuron, could pave the way to new intervention strategies. “If established that these viruses indeed play a role in the development of Alzheimer’s, retroviral agents should be tested as a potential therapy,” says Dudley.

In the other study, available as a preprint on the Cell website and in Neuron July 11, Rudolph Tanzi and Robert Moir, both researchers at Harvard Medical School and Massachusetts General Hospital, and their colleagues tested how amyloid-β in the brain—which these labs previously found to be an antimicrobial—reacts to herpes simplex virus 1 (HSV1), HHV6A, and HHV6B. These strains all tend to integrate into the genomes of neurons. They found that in a culture of human neuronal cells, amyloid-β could prevent HSV1 infection and can bind and aggregate the HSV1 and HHV6 viruses. Mice infected with HSV1—which can cause encephalitis—that also had genetically elevated amyloid-β expression were protected against encephalitis, but also had increased amyloid deposits.

“These studies further add to the steadily increasing number of papers that support a microbial role in Alzheimer’s disease,” Ruth Itzhaki, a molecular neurobiologist at the University of Manchester in the U.K. who studies the link between viruses and the development of Alzheimer’s disease, writes in an email to The Scientist.

A recent epidemiology study adds real-world credence to the microbial link to Alzheimer’s. A population study in Taiwan examined more than 33,000 individuals and found that those with a herpes simplex virus infection had a 2.5-fold greater risk of developing Alzheimer’s disease. The study authors found that in those people treated with antiherpes medications, the 2.5-fold risk dropped back down to baseline.

“The conclusion you can draw is that the antiherpes medication reduced the risk of Alzheimer’s by keeping the herpes infection in check,” says Moir.

Itzhaki agrees. This study and two others, also from Taiwan, appear to link HSV1 causally to Alzheimer’s disease, she writes. “Despite various shortcomings, these Taiwan studies are the essential first steps to a proof that a microbe could be the cause of a non-infectious disease, in this case, Alzheimer’s.” Itzhaki and a colleague wrote about these studies recently in a commentary, which aimed to interpret the “important and surprising Taiwan data” on the effectiveness of the antiviral treatment, Itzhaki tells The Scientist.

Carter cautions that the new reports should not be interpreted to mean that there is likely a single, unique Alzheimer’s pathogen, if there is one at all. “These data suggest that multiple pathogens, and not just these viruses, likely contribute to Alzheimer’s disease. It is also likely that the pathogens may vary between Alzheimer’s patients.”

The Mount Sinai team will now be verifying whether HHV6 and HHV7 are actually integrated into the genomes of Alzheimer’s patients’ brains and testing for the presence of HHV6 and HHV7 in the bloodstream and central nervous system of Alzheimer’s patients. They would like to do a study comparing living patients and controls to see if the link they observed between the viruses’ presence and changes in gene regulation related to Alzheimer’s holds up.

Correction (June 21): We removed two sentences in paragraph seven. One noted the prevalence of virus in diseased brains, but did not note that the prevalence is the same in control brains. The other sentence misstated the regions of the brain where the viruses were in greater abundance compared to control brains and stated these brain regions were linked to Alzheimer’s disease. The Scientist regrets the error.

Comments Off on Herpes Viruses Implicated in Alzheimer’s Disease

What the Mystery of the Tick-Borne Meat Allergy Could Reveal