Hopkin’s Study Shows Severe Symptoms in Some After Lyme Treatment 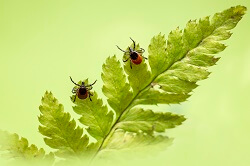 In a study of 61 people treated for the bacteria that causes Lyme disease, Johns Hopkins researchers conclude that fatigue, pain, insomnia and depression do indeed persist over long periods of time for some people, despite largely normal physical exams and clinical laboratory testing.

The findings, published in the December issue of Frontiers in Medicine, could spur further investigation into the cause of persistent symptoms, a source of medical controversy. As Lyme disease rates have steadily climbed in the United States since it was first recognized in the mid-1970s, so have reports of a collection of symptoms that patients commonly refer to as chronic Lyme disease. Experts in the field have questioned the validity of this term because of the lack of direct evidence in this group of patients of ongoing infection with Borrelia burgdorferi, the bacterium that causes Lyme disease.

Efforts to better understand patients with these symptoms have largely failed, says Aucott, because patients grouped under the umbrella term “chronic Lyme disease” could belong to one of various subgroups.

“People have been comparing apples to oranges by grouping all of those with chronic Lyme disease together,” he says. “Our study was designed to compare apples to apples.”

To do that, Aucott and his colleagues first agreed to study individuals with PTLDS, a disorder defined by the Infectious Diseases Society of America as the development of significant fatigue, widespread musculoskeletal pain and/or cognitive difficulties that arise within six months after completion of antibiotic therapy for physician-documented Lyme disease and that last for at least six months. They meticulously gathered prior medical records for evidence of Lyme disease and excluded patients with conditions that may mimic those of PTLDS.

Aucott cautions that because so little is known about the origins of PTLDS, its underlying cause has remained unclear, and a range of hypotheses exist. This study, and the term “PTLDS,” do not define the cause of the condition, but do provide a starting place for future studies.

The researchers recruited 61 patients who were either self- or physician-referred to the Lyme Disease Clinical Research Center at Johns Hopkins and who met the study criteria. Roughly half were women and half were men, ranging in age between 18 and 82. Also recruited were 26 healthy controls, also split nearly evenly between the sexes and about the same ages as the other group, with no clinical history of Lyme disease symptoms and no antibodies to Borrelia burgdorferi that would indicate past or current infection.

For each of these individuals, Aucott and his team ran a comprehensive battery of clinical and laboratory tests. A trained interviewer collected a detailed medical history, and participants received a physical exam that assessed vital signs and examined various organs and joints. They also received an extensive neurological assessment. Laboratory tests checked for general markers of health in their blood as well as antibody markers of past exposure to Lyme disease. Study participants also completed standardized questionnaires that measure the severity of fatigue, pain, sleep disturbance and depression, as well as quality of life.

Aucott says that between the two groups, few clinically significant differences existed in results of the physical exams and clinical laboratory tests, except for an abnormal inability to sense vibrations in some PTLDS patients. The diminished vibratory sensation is a marker for neurologic involvement that has been seen in other studies of Lyme disease

“By and large, all the test and exam results from both the PTLDS patients and the healthy controls were not statistically significantly different by group, including their blood tests and physical exams.” Aucott says. “We found no truly objective markers of PTLDS on any of these clinically available tests.”

These symptoms, Aucott says, appear to reflect the significantly higher scores in a measure of depression and significantly lower scores on the SF-36, a widely used 36-item questionnaire that measures health-related quality of life.

“Even though their exams and lab tests didn’t show much in the way of a common or clear biological marker or markers of PTLDS, it’s clear these patients don’t feel well,” says study co-author Kathleen Bechtold, Ph.D., associate professor of physical medicine and rehabilitation at the Johns Hopkins University School of Medicine. “These symptoms are more severe than what the average non-PTLDS patient is experiencing even on a bad day.”

The findings show distinct differences between PTLDS and the normal aches and pains of daily life, Bechtold adds. Even with no objective laboratory or exam markers, she says, the results of this study suggest that PTLDS can be diagnosed through careful and thorough examination of symptoms.

More accurate identification of the subset of patients with PTLDS would go a long way to improving diagnosis and care of this specific subgroup and eventually to allowing future studies of specific therapies. To this end, Aucott and his group are currently analyzing cognitive testing results and blood samples taken from patients who participated in this study to search for research biomarkers that were not examined in the initial study.

An estimated 300,000 people in the U.S. are diagnosed each year with Lyme disease according to the Centers for Disease Control and Prevention. Of those ideally diagnosed and treated, studies have reported a wide range (5 to 30 percent) of the proportion that goes on to experience PTLDS. In this study, risk factors such as delayed diagnosis and exposure to inappropriate antibiotics and steroids prior to appropriate treatment occurred in over half the PTLDS patients.

Hopefully this work will begin to move the tidal wave that has been smashing against patients for 40 years.  The acknowledgement by researchers that people are obviously suffering with numerous severe symptoms despite normal test results is a move in the right direction.

If I had a dollar for every Lyme patient’s normal test, I’d be a millionaire.  This fact is a challenge to explain to patients who often feel as if they are dying, or the pain, fatigue, and cognitive issues are so devastating – they want to die.

The tests come back normal and their doctors feel smug in telling them their symptoms definitely are not Lyme/MSIDS related – yet we all know they are.  How can you go through life feeling great, get infected, and then your life as you know it comes to an abrupt end?  You still suffer untold miseries despite typical treatment outlined by the IDSA/CDC?  Something is amiss and it must be found.

They used to say approximately 10% go on to develop chronic symptoms – which was bumped up in this study to anywhere from 5-30%.  All I know is everyone I deal with is in this category, so either I’m only getting all the bad ones or the numbers are falsely low.  I surmise the latter.  If you consider all those who are misdiagnosed with things like MS, Lupus, ALS, dementia, Alzheimer’s, fibromyalgia, and other autoimmune disorders, the numbers are falsely low.

One other huge deer fly in the ointment is the involvement of coinfections which make our cases much more complex and difficult to treat:  https://madisonarealymesupportgroup.com/2017/07/01/one-tick-bite-could-put-you-at-risk-for-at-least-6-different-diseases/

So, as I tell patients, “All the doxy in the world isn’t going to cure this.  It’s like taking sand and throwing it into the ocean.”  Don’t get me wrong, doxy is a great front-line drug with action against many pathogens, but researcher Eva Sapi has found doxy to throw the spirochetal form into the cyst form later.  I am afraid this mono-treatment might be setting people up for dementia/Alzheimer’s later on in life.  https://www.ncbi.nlm.nih.gov/pmc/articles/PMC3132871/  Doxycycline reduced spirochetal structures ∼90% but increased the number of round body (cyst) forms about twofold.

For more on persistent infection: https://madisonarealymesupportgroup.com/2017/08/25/sleeper-cells-the-stringent-response-and-persistence-in-the-borreliella-burgdorferi-enzootic-cycle/

https://madisonarealymesupportgroup.com/2017/12/02/scottish-doctor-gives-insight-on-lyme-msids/ “If you look at major medical microbiology and infectious disease textbooks, they state that after 4 weeks you can’t find the Lyme bacteria anymore. Therefore Lyme is then categorised as ‘post infectious’. But I get back to the point I’ve made before: if you can’t culture it, you cannot know anything about its viability. You do not have a organism specific test (culture or PCR), that guides your ‘test of cure’. How do you say that a bacteria is killed, when you couldn’t grow and measure it in the first place?” “One of the rules of infectious diseases medicine is that once you stop treatment and the patient stays better, they are cured. When they get worse, the infection has returned and they have relapse of infection and need repeat treatment. My ID colleagues live by that rule with most other infections, but not with Lyme.”

http://lymeology.com/lyme-101-three-forms-borrelia-corresponding-antibiotics/  Here Dawn Wilson, a former cellular biologist sidelined by Lyme/MSIDS, has a great page explaining it as well.

Miyamotoi in Ixodes Pacificus in California