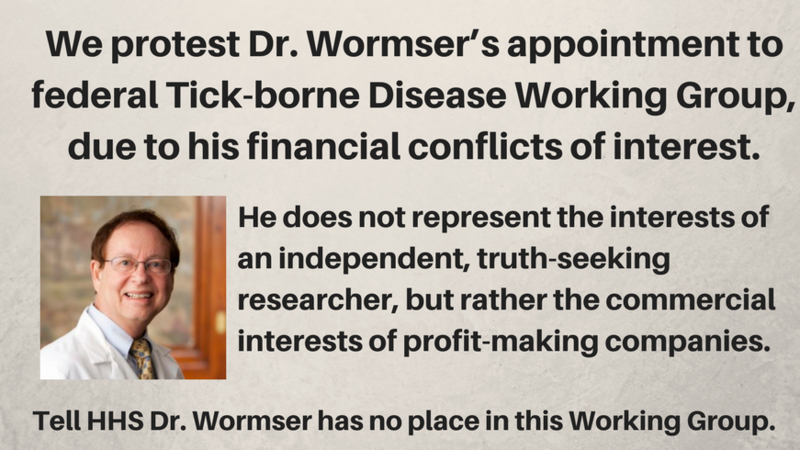 The federal Tick-Borne Disease Working Group was established by 2016’s 21st Century Cures Act. The goal was to bring together a diverse set of stakeholders, including treating physicians, researchers, patients, advocates and government officials to help inform federal policy regarding Lyme and other tick-borne diseases.

Unfortunately, Dr. Gary Wormser was recently named to the group. Dr. Wormser has substantial conflicts of interests with lab companies and other commercial interests.

In a recent article he disclosed conflicts of interest with Immunetics, Inc. (the developer of the C6 Lyme test, which he promotes). The C6 Lyme test is known to be highly insensitive, yet the IDSA guidelines require positive lab tests in order for patients to be diagnosed and treated for Lyme disease. This means that patients must obtain repeated blood tests to obtain positive results, which helps drive up the profits of testing companies such as Immunetics.

Dr. Wormser also discloses Lyme-related conflicts of interests with Abbott, Institute for Systems Biology, Rarecyte, Inc, and Quidel Corporation. He also has financial ties to insurance companies, who have paid him to testify in court against doctors who treat Lyme disease outside of the IDSA guidelines.

As chairman of the Infectious Diseases Society of America (IDSA) Lyme guidelines revision panel, Dr. Wormser was a defendant in the 2006 antitrust investigation of the IDSA by then-Attorney General Richard Blumenthal of Connecticut.

Those guidelines leave many patients chronically ill. Lyme patients do not trust the IDSA and do not want to be treated according to the IDSA guidelines. Yet the IDSA guidelines are influential and are used by state medical boards in disciplinary proceedings against nonconforming physicians and by insurers to deny essential care to patients. This has a chilling effect on the willingness of doctors to stray from the IDSA guidelines or even to accept people with chronic Lyme disease as patients.

The Working Group is supposed to represent a diversity of views regarding Lyme and other tick-borne diseases. We are not protesting Dr. Wormser’s views. We are protesting his serious financial conflicts of interest.

Dr. Wormser cannot sit on this panel without these conflicts of interest influencing his messages. He does not represent the interests of an independent, truth-seeking researcher, but rather the commercial interests of profit-making companies. As such, he has no place in this Working Group.

You can read more about why LymeDisease.org protests Dr.  Wormser’s participation in the Working Group here: https://www.lymedisease.org/wormser-wrong-choice-lyme-panel/

This petition will be delivered to:

I just signed the petition, “Dr. Richard Wolitski: Remove Wormser from federal TBD working group due to financial conflicts of interest.” I think this is important. Will you sign it too?
Here’s the link:
https://www.change.org/p/dr-richard-wolitski-remove-wormser-from-federal-tbd-working-group-due-to-financial-conflicts-of-interest?utm_medium=email&utm_source=petition_signer_receipt&utm_campaign=triggered&share_context=signature_receipt&recruiter=691649771
Thanks,
Alicia

Comments Off on Please Sign Petition – Get Wormser Out!