Gender bias is now a widely recognized problem in research. Sometimes this happens because women haven’t been studied in the first place. Even when they have been included in the research, their results may not be analyzed separately from those of men. Because of this, we don’t know much about how women differ from men in how they contract a disease, are diagnosed, or respond to treatment.

Is this an issue in Lyme disease? Are women more likely to get Lyme disease, more difficult to diagnose, or more prone to treatment failure? We decided to launch a research study using data from the MyLymeData patient registry. To kick off the study, we asked Dr. Raphael Stricker to explain how males and females with Lyme disease might differ. His video presentation is included below.

Dr. Stricker identified four major areas in Lyme disease where males and females are not alike:

The CDC Western blot criteria requires that 5 of 10 bands react for a lab test to be considered positive. A study by Feder, showed that men tend to have 6 positive bands, while women have only 4 positive bands. These women will not test positive for Lyme disease or receive the timely diagnosis and treatment needed to get well (Stricker, Johnson 2009). 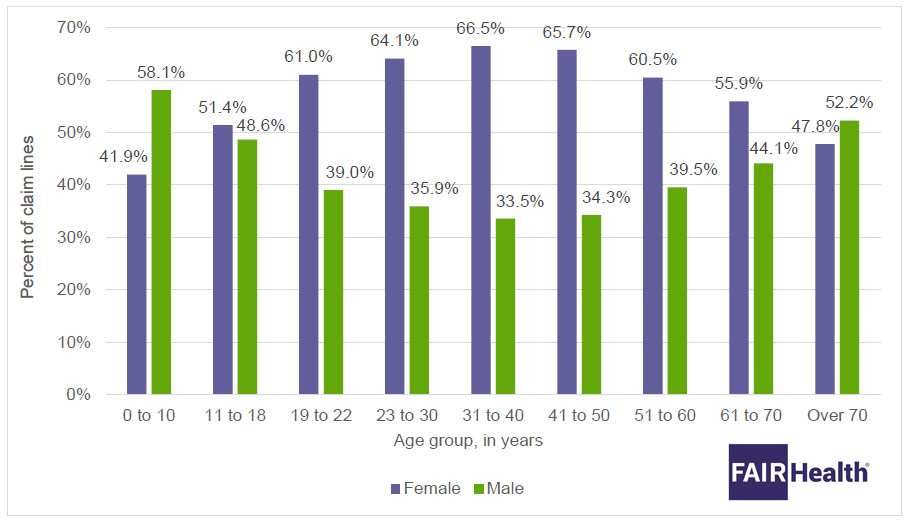 According to CDC data for 2017, among patients with reported confirmed and probable cases of Lyme disease, males predominated over females by 58 percent to 42 percent—nearly the opposite of FAIR Health findings.
— FAIR Health 2019.

FAIR Health researchers conclude that the difference between their statistical observations and those of the CDC stats may be due to the fact that FAIR Health data is from clinical practice, while CDC-reported cases are inherently skewed toward diagnosis based on lab tests. This result is similar to the findings reported in a Harvard study using Quest Lab data for Lyme disease. That study found that while males were more likely to have positive lab test results, overall, more females contracted the disease (Lee-Lewandrowski 2019).

Both the FAIR Health and Quest lab study support Dr. Stricker’s observation that Lyme lab tests favor males over females in terms of positive results. They also suggest that there may be considerable variation between the sexes in Lyme disease.

Fair Health report on Lyme disease prevalence — For some ages (23-50), there were almost twice as many females as males with Lyme disease.

Research studies often exclude women because of pregnancy-related concerns. Or, they may simply neglect to take the extra step of evaluating differences between the sexes. Often what we “know” in science is based on men who participated in a study or averages across the sexes. As a result, we know very little about women.  The end results is that “data can be sexist” as the Gates Foundation points out in its 2019 Annual Letter (Gates Foundation 2019).

Looking at the broader issue of gender bias in women, we are just now beginning to understand sex-based differences that may be key in medicine (Epstein 2019).  For example, women having heart attacks are diagnosed less timely. Women are also 50-75% more likely than men to have adverse side effects from drugs (Epstein 2019). A recent article in Nature found that male and female mice have remarkably divergent biological pathways for pain – driven in part by distinct immune cell types and hormones (Dance 2019). Males and females also may respond to pain medications differently. As a result, drug companies are thinking about sex-specific pain treatments. Should we be looking at sex-specific antibiotics in Lyme disease?

Eighty-three percent of patients with persistent Lyme disease that are enrolled in MyLymeData are female. Our team of researchers is exploring MyLymeData to see what the data so graciously donated by patients might yield on the topic of gender bias in Lyme disease. We will be sure to keep you posted.

The MyLymeData Viz Blog is written by Lorraine Johnson, JD, MBA, who is the Chief Executive Officer of LymeDisease.org. You can contact her at lbjohnson@lymedisease.org. On Twitter, follow her @lymepolicywonk. If you have not signed up for our patient-centered big data project, MyLymeData, please register now.

Comments Off on Lyme Disease Prevalence: Does Sex Matter?