Vector-borne diseases like bartonellosis and Lyme borreliosis require the transfer of pathogens from a reservoir to humans by a “competent” vector.

A competent vector can acquire, carry, and pass on the living pathogen. The vector is generally an insect or arthropod that picks up the pathogen(s) while feeding from a reservoir species, such as deer or mice, and later infects an accidental host (a host that is not the usual reservoir) such as a human via a bite or excretions (feces).

Despite what may seem like an obvious cause and effect relationship, it can be very difficult to prove that a vector is competent. Some scientists have heroically proven vector competency by infecting themselves. You can read more about scientists who died as a result of making themselves their own Bartonella experiments here.

Because of the work of those scientists and others, we know that

After that the science becomes more uncertain.

The most controversial vector for Bartonella species is hard-bodied ticks of the genus Ixodes. PCR-based assays that detect fragments of DNA have shown that Bartonella bacteria can be found in their gut. However, the research on how viable bacteria are transmitted is still incomplete. 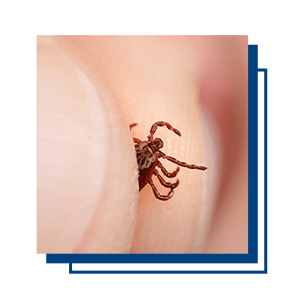 In one study of Ixodes ricinus collected in France, the authors were able to show that Bartonella henselae could be transmitted using an artificial feeding method. If one were to question whether this were adequate proof, the question would center around the fact that the transmission was observed in a controlled laboratory setting and not in nature.

Patients with Bartonella and other tick-borne infections sometimes recall a single tick bite that may have allowed for multiple pathogens to be transferred. Some scientists see this evidence as circumstantial as well and suggest more research is necessary before ticks are considered a competent vector for Bartonella.

Research and case studies have suggested additional arthropod vectors such as ants, mites, spiders, and more. They are not typically suspected in bartonellosis cases due to the very limited number of cases, but the potential is there. See below for some interesting cases:

The development of novel molecular techniques like PCR and its variations have allowed researchers to detect Bartonella species in a wide range of insects, arthropods and crustaceans around the world.

Our ePCR technology is used by research partners around the world to better understand the One Health relationship between people, animals and the environment. Mapping the relationship between reservoirs, vectors and human and animal hosts is an important step in making prevention the best treatment.

One thing’s for sure – patients in Lyme-land OFTEN have Bartonella as well. Mainstream medicine/research doesn’t even contemplate or consider this well established fact and continues to treat this as a one-pathogen, one-drug disease when nothing could be further from the truth: https://madisonarealymesupportgroup.com/2018/10/30/study-shows-lyme-msids-patients-infected-with-many-pathogens-and-explains-why-we-are-so-sick/  This recent paper sums it up nicely:

“Our findings recognize that microbial infections in patients suffering from TBDs (tick borne diseases) do not follow the one microbe, one disease Germ Theory as 65% of the TBD patients produce immune responses to various microbes.”

For the first time, Garg et al. show a 85% probability for multiple infections including not only tick-borne pathogens but also opportunistic microbes such as EBV and other viruses.

And, according to this review, 83% of all commercial tests focus only on Lyme (borrelia), despite the fact we are infected with more than one microbe.  The review also states it takes 11 different visits to 11 different doctors, utilizing 11 different tests to be properly diagnosed.  https://www.news-medical.net/news/20181101/Tick-borne-disease-is-multiple-microbial-in-nature.aspx?

Thousands of patients are flying under the radar.