Lyme Found in All 50 States

LYME SCI: Lyme has been found in all 50 states and is on the rise 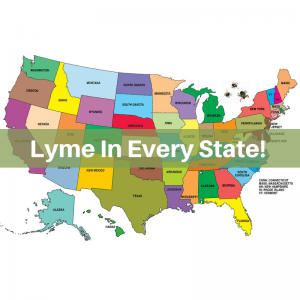 by Lonnie Marcum, August 2018
Quest Diagnostics has released its findings from over six million Lyme disease lab tests taken over the last seven years.  Quest’s report says Lyme has been detected in all 50 states and the District of Columbia—and that the number of cases continues to rise nationwide.  This report provides the first national analysis of Lyme disease based on laboratory data. (See here for similar data based on insurance claims.)

According to Quest’s report, 60% of Lyme disease cases occur in the Northeastern United States, with a decided spike in the last few years.

More surprising to me was the exponential increase in the number of positive test results found in California and Florida, two states often dismissed by the CDC as not having very much Lyme disease.

What’s most disturbing about these numbers is the huge discrepancy between the positive test results and the number of cases reported by the CDC.

Let me break it down…

First, let’s look at the big picture by comparing the CDC map (each dot represents one CDC positive case), and the Quest map showing the number of positive test results. Note, the Northeast looks pretty similar between the two maps, but what is going on in the South and West? Why such glaring discrepancy? 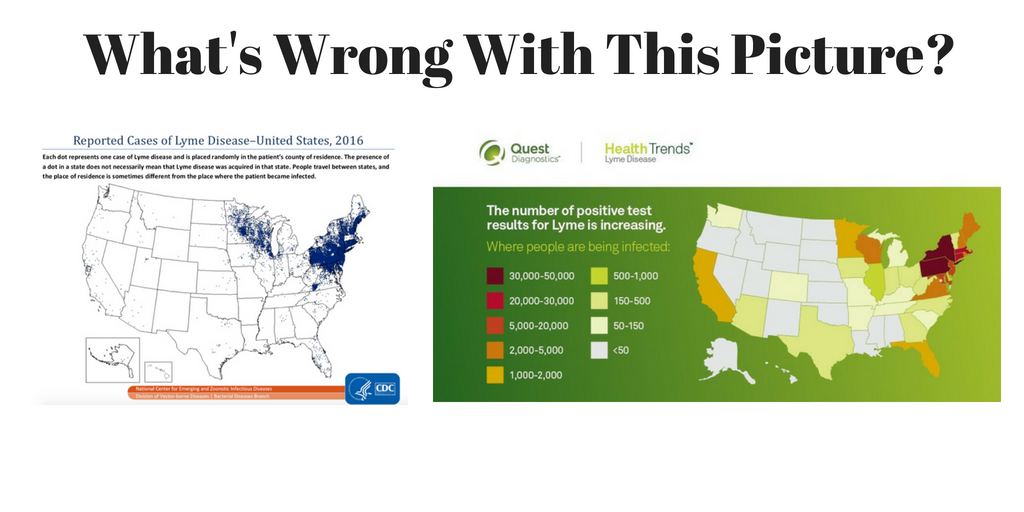 In 2015, Quest found 164 cases of Lyme disease in California—while the CDC acknowledged only 83 cases. (California has mandatory lab reporting of Lyme disease. So, those cases from Quest were reported to state officials—and then what happened?)

That same year, Quest found 283 cases in Florida while the CDC reported 116.

In 2016, Quest again shows twice the CDC totals for California, but an even bigger gap emerges in Florida, with Quest reporting three times as many as the CDC. See below:

And, keep in mind, Quest is only one of many laboratories in the U.S. What about positive Lyme tests from other labs?

LymeDisease.org’s own research project, MyLymeData, has also detected discrepancies between the CDC-reported cases and the number of patients with positive tests for Lyme in the South and West. [See LYMEPOLICYWONK: Why Doesn’t the CDC Count Lyme Disease Cases in the South and the West? Everybody Else Does.]

The spread of Lyme disease makes sense with the latest NIH report showing the Ixodes scapularis tick, the primary source of Lyme disease, being found in nearly 50 percent more U.S. counties in 2015 than was detected in 1996.

Further confirming the increasing spread, a recent citizen science study also found Ixodes scapularis ticks in 83 counties (in 24 states) where these ticks had not been previously recorded. But why?

“Our data show that positive results for Lyme are both increasing in number and occurring in geographic areas not historically associated with the disease. We hypothesize that these significant rates of increase may reinforce other research suggesting changing climate conditions that allow ticks to live longer and in more regions may factor into disease risk.”

Lyme disease is only one of 16 tick-borne disease found within the United States. How many other illnesses are being undiagnosed and/or underreported? Is there also a 10-fold difference in reporting of anaplasmosis, babesiosis, rickettsiosis and other tick-borne pathogens, including viruses?

The CDC recently acknowledged that 75% of all reported vector-borne illnesses come from ticks, and of those, most are cases of Lyme disease

Underreporting of Lyme and other tick-borne diseases is a huge problem. It’s time to fix it.

According to an independent tick expert, Dr. Kauffman’s hypothesis of climate change driving ticks and Lyme is not only unsubstantiated but part of a nefarious plot being used to rationalize why nothing has been done about Lyme/MSIDS for decades.  https://madisonarealymesupportgroup.com/2017/08/14/canadian-tick-expert-climate-change-is-not-behind-lyme-disease/

Warmer weather actually reduces tick populations.  The climate models have numerous flaws as well:  https://madisonarealymesupportgroup.com/2018/08/13/study-shows-lyme-not-propelled-by-climate-change/  Researcher John Scott shows ticks are marvelous ecoadaptors and will seek out and use leaf litter and snow when conditions are harsh.  Migrating birds are serving as transits for ticks and distributing them all over the word.

https://madisonarealymesupportgroup.com/2018/08/09/why-the-cpis-article-on-how-a-climate-skeptic-is-holding-up-tick-borne-illness-research-is-dead-wrong/   Ticks have been found on beaches, in caves, underneath picnic benches, on rocks, on birds and other animals, blown into swimming pools, falling off trees, and I’ve found them climbing my walls.  “Tick guy” Tom Mather demonstrates ticks surviving 24 hours in 3 degree temps:  https://madisonarealymesupportgroup.com/2016/01/20/polar-vorticks/

“People should be aware of ticks and tick-borne disease, even when they may think there’s not a recorded incidence of a tick in a county,” Nieto said. “These things, they’re not obeying borders. They’re going by biology. If they get moved there by a deer or bird or people or pets, they’re going to establish themselves and start growing.”

https://madisonarealymesupportgroup.com/2018/07/26/tickborne-diseases-confronting-a-growing-threat/  (For a bullet point list of issues that need to be researched regarding TBI’s please read my comment after the article.  Climate data has not helped patients at all.  Please understand my list is far from complete.)

Climate change regarding Lyme/MSIDS/ticks is as Scott says,

Comments Off on Lyme Found in All 50 States

The Eyes May Have it, An Early Sign of Parkinson’s Disease

The NY Times & the Question of a Lyme Vaccine