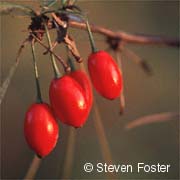 http://phys.org/news/2012-02-japanese-barberry-tick-borne-diseases.html
According to assistant extension professor in the Department of Extension in the College of Agriculture and Natural Resources, Tom Worthley, if the shrub Japanese Barberry (Berberis thunbergii) is controlled there will be less tick-bourn infections, or TBI’s.

Introduced into the US in 1875 as a hardy plant that is attractive, it was deemed a problem child in the 80’s when it started spreading, crowding out native plants, and providing perfect conditions for earth worms. After the worms ate the litter layer, gullies formed, causing erosion, and negative soil chemistry.

But the kicker, Worthley states, is that ticks love the humid conditions caused by the Barberry. And, since the Barberry is now considered an invasive, it is found everywhere – including the woods. It is also listed as the “least wanted,” by the Plant Conservation Alliance’s Alien Plant Working Group.

http://www.outsideonline.com/1915071/rise-tick?page=all
When Scott Williams, wildlife biologist from the Connecticut Agricultural Experiment Station in New Haven, tested the Japanese barberry with humidity sensors, it tested humid enough for tick questing and mating for 23-24 hours a day. They also made a map showing the distribution of the shrub and overlaid a Lyme disease distribution map over it. They are remarkably similar.

But all characters in a good play have many sides.

http://www.raysahelian.com/barberry.html
According to Ray Sahelian, M.D., the delinquent Barberry has the alkaloid Berberine which has a strong history of use in both Indian and Chinese medicine and is found in the roots, rhizomes, and stems. The same substance found in Goldenseal, Coptis or golden thread, and the Oregon Grape, is even stronger in Barberry according to some experts. It also has carbohydrates, organic acids, vitamins, poliphenolic compounds, pectin, tannin, and minerals. The berries have been made into jam and for cooking.  Its wood and its root have a distinctive electric yellow color.

http://www.dcnr.state.pa.us/cs/groups/public/documents/document/dcnr_010260.pdf  Berberis thunbergii or Japanese barberry is a species in cultivation and can be identified due to its flowers being produced in umbels (think umbrella shaped), and has very poor tasting berries, while Berberis vulgarism or European barberry grows wild in much of Europe and West Asia and can be identified by its flowers being produced in racemes and produces large crops of edible berries rich in vitamin C, but has a very sharp acidic flavor and is used by locals similarly to how citrus peel might be used. It is the vulgarism species used predominantly in herbal medicine.

http://m.phys.org/news/2014-03-intelligent-assumed.html
German researchers have discovered that the vulgarism species can make complex decisions. In a nutshell, it can abort its own seeds to prevent parasite infestation, particularly of the tephritid fruit fly, while its relative, the Oregon Grape, has no such capability. It even appears able to anticipate. The researchers found that if the infested fruit contains two seeds, then in 75 percent of the cases, the plants will abort the infested seeds, in order to save the second intact seed. If the fruit only contains one seed, then the plant will only abort the infested seed in 5 percent of the cases, perhaps speculating that the larva could still possibly die naturally.

There are differences between the two species but they both have antibacterial, antiseptic, and anti-cancer attributes, and both contain Berberine, universally present in rhizomes of Berberis species. Since it is not appreciably absorbed by the body, it is used orally in the treatment of various enteric infections, especially bacterial dysentery.

http://www.pfaf.org/user/Plant.aspx?LatinName=Berberis+vulgaris
The vulgarism species is rated higher medicinally, and is also an astringent, antispasmodic, diuretic, expectorant, laxative, purgative, stomachic (kills intestinal bugs including candida and C. difficile), refrigerant, and useful for TB, diarrhea, and as a tonic for the gallbladder to improve the flow of bile. A tincture of the root bark, about 6% berberine, has been used in the treatment of rheumatism and sciatica. It has also been used against malaria, as well as for opium and morphine withdrawal.

According to Master Herbalist, Steven Buhner (2015), Berberine is a very strong antibacterial and is active against a large number of resistant and nonresistant bacteria. Similar to garlic, he feels it is not systemic and potent enough to work as a primary treatment for Babesia, but it is effective against numerous strains of Mycoplasmas due to the fact most of it is excreted in the kidneys, urinary passages, and bowels. Only a tiny fraction of Berberine is systemic as the body considers it a toxin and is one of those herbs that should not be taken over long periods of time. But, probably, the greatest benefit is it is found to be synergistic with pharmaceuticals by increasing their activity and effectiveness. (2013).

Barberry is perhaps another one of those invasives that needs a second glance. MSIDS sufferers have found many plants considered pests by the experts to be quite helpful in their treatment. A mug-shot lineup would include Japanese Knotweed, the greater celandine, bidens, sida, kudzu, isatis, houttuynina, Eleutherococcus spinosus, teasel, and the thorny delinquent, barberry shrub.

Buhner states some of the most helpful herbs are scattered everywhere and that instead of eradicating them we should be asking why they are here.  I couldn’t agree more.

Perhaps we can work out a deal with the DNR to harvest a portion of these invasives and give them to sick patients!

For more information go to:  http://umm.edu/health/medical/altmed/herb/barberry

Comments Off on Barberry: Friend or Foe?